A highly configurable, compute-intensive block, with up to 32 multipliers

Many industries are rapidly adopting artificial intelligence and machine learning (AI/ML) technology to solve many intractable problems not easily addressed by any other approach. The exploding growth of digital data of images, videos, speech and machine generated data, from a myriad of sources including social media, internet-of-things, and videos from ubiquitous cameras, drives the need for analytics to extract knowledge from the data. These data analytics often rely on AI/ML algorithms, which have a unique ability to quickly solve problems of high dimensionality that cannot be solved with classical computer algorithms.

FPGA as an AI/ML Engine

Achronix's new Speedster7t FPGA family has been designed specifically to meet these challenges. Every aspect of the Speedster7t FPGAs' architecture has been tuned to create an optimized, balanced, massively parallel compute engine for AI/ML applications. Each Speedster7t FPGA feature a massively parallel array of programmable compute elements, organized into new machine learning processors (MLP) blocks. Each MLP is a highly configurable, compute-intensive block, with up to 32 multipliers, that support integer formats from 4 to 24 bits and various floating-point modes including direct support for Tensorflow’s bfloat16 format and block floating-point (BFP) format. 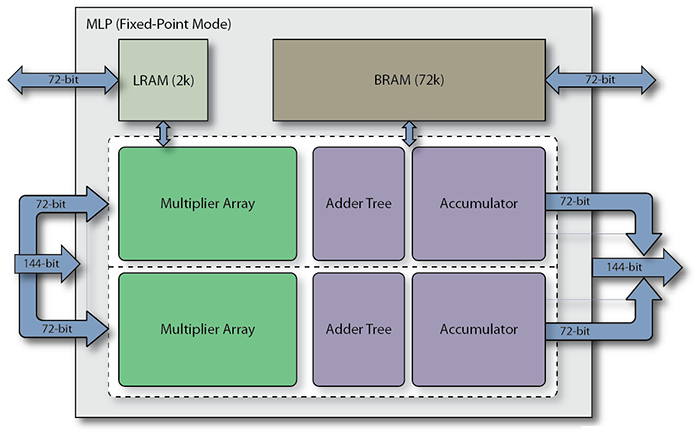 The MLP's programmable MAC incorporates both a fracturable, integer MAC and a hard floating-point MAC. Each MLP block in the Speedster7t fabric also incorporates two memories that are closely coupled to the MAC blocks. One memory is a large, dual-port, 72-kb embedded SRAM (BRAM72k), and the other is a 2-kb (LRAM2k) cyclic buffer. The number of available MLP blocks varies by device, but can number into the thousands.

The MAC's fracturable nature allows it to optimally handle the reduced-precision calculations increasingly used by AI/ML inference algorithms to minimize memory requirements. Due to its fracturable nature, the MLP can perform an increasing number of computations as the precision of the number formats are reduced.